Ghanaian celebrity blogger Ameyaw Kissi Debrah, known professionally as Ameyaw Debrah has gone to the aid of Daniel Asare Amoako who passed his WASSCE exams but cannot continue his education to the university because his mother cannot afford the fees.

The freelance journalist, and reporter on Tuesday, October 10 sent an undisclosed amount of money to Mrs Rebecca Larbi, mother of the Daniel to pay the boy’s school fees. According to Ameyaw, he heard a voice telling him to pay the fees of the brilliant but needy student after he retweeted a post by one @ekua_bronii asking the public to help Daniel Asare Amoako pay the school feels.

Below is how Ameyaw Debrah shared his story about Danny whose dream of entering the university was about to be shut because his mum could not get a loan.

“On Monday a Twitter follower, @ekua_bronii tagged me in a post asking for people to support a mother to pay for the admission fees of her son. As I usually do, I immediately retweeted the message to help spread the message, which also mentioned the wife of Ghana’s Vice-President.

In a sudden epiphany moments after retweeting the message, a voice inside me said ‘why not help the boy yourself?’ I then asked for the amount needed and after the breakdown, I offered to pay the fees.

FORGIVEN @ekua_bronii
Replying to @ameyaw112 and 4 others 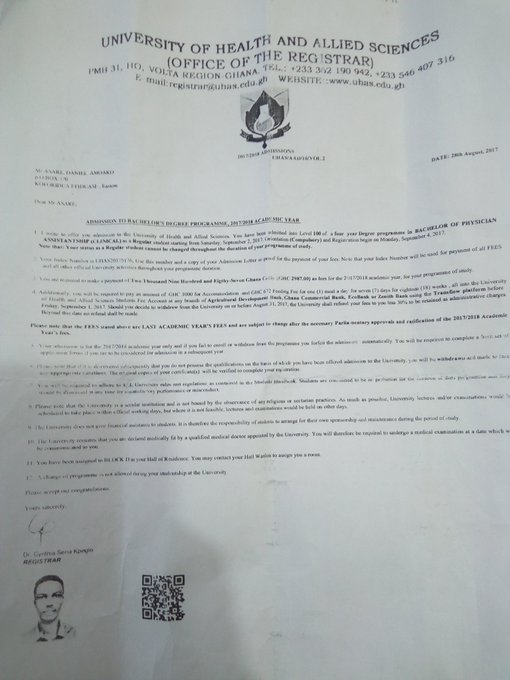 Mrs Rebecca Larbi is a mother of five who lives in Adukrom in the Eastern Region. She had gone to Ho, where her son, Daniel Asare Amoako has gained admission to the University of Health and Allied Science. Out of frustration and inability to raise money for the fees, she went to a bank in Ho, where @ekua_bronii works, for a loan.

However since she didn’t have an account at the bank, it meant she couldn’t access any loan facility there. The story touched @ekua_bronii , who decided to take it to Twitter for support.

I inboxed her to get more details and soon I was put in touch with the family. I asked for bank details on Monday evening. And on Tuesday afternoon I went to the bank to make a deposit to cover the amount Daniel had to pay.

From Daniel’s past results, it is clear that he is a brilliant chap. I can only hope that my little support will go a long way to usher him into the future he dreams about. I also hope my little random act of kindness will inspire you to also help someone out when you can. Spread the love!”

Related Topics:
Up Next